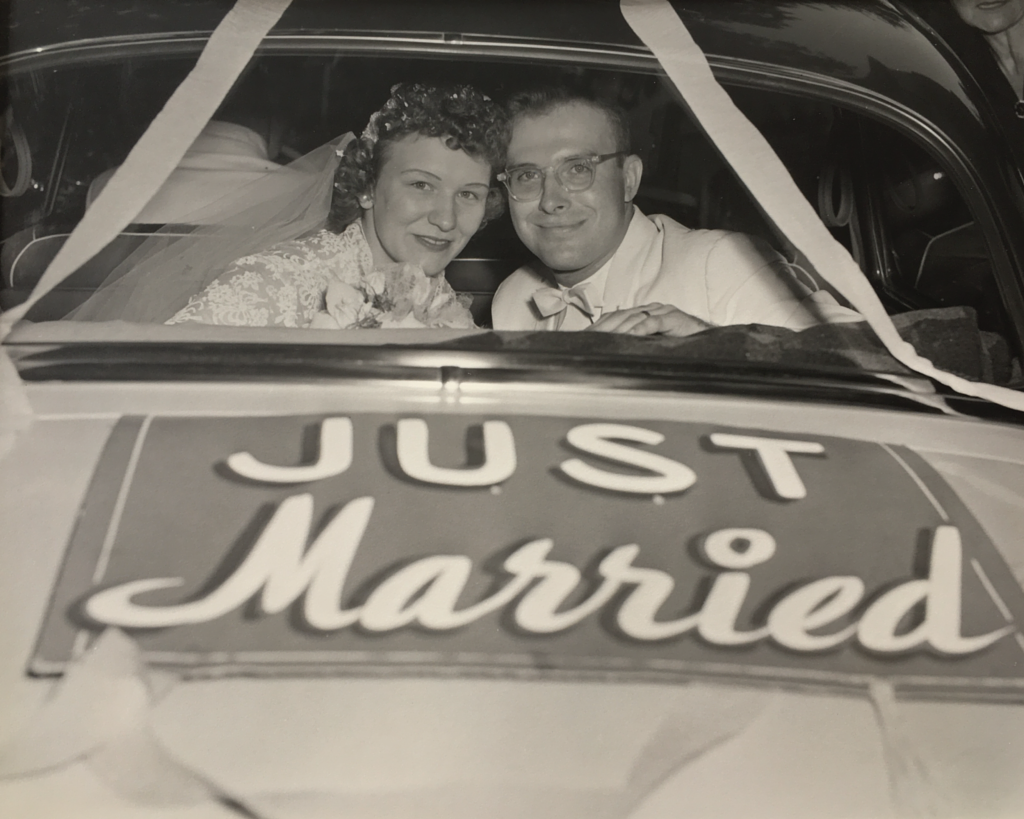 stories of love have always been my inspiration. they were what hooked me. they are the reason robert emerson design exists. so when i sat down and thought about the new blog and stories i wanted to tell, i knew "story of love" had to be there. i have always been a sucker for a good love story. the plan is once a month to feature a new "story of love" and for our inaugural post, i could think of only one couple, my grandparents. they are the longest relationship i have ever known and one of my favorite stories of love. i'll let them tell the rest.

what are your names?

when did you first meet?

june: february before he left for the service in (fall) 1950.

editor’s note: nelson was a army engineer who served during the korean war.

how did you meet?

june: we met at a dance, rebeccas, it was a girls lodge - i was the junior girls of the rebeccas, we started at 18. he was told to take his sister to the the rebeccas dance, he was having a fit, he did not want to take his sister. the usual things boy complain about. (at the dance) we were sitting down eating and i was paying more attention to one of his friends, so he decided to walk me home. and he did. and after that he asked me for a couple of dates, and then he got his draft notice. he wanted to be engaged before he left.

how did you propose?

june: he didn't get on his knee or any fancy deals, we got in the car and he said I'm going to marry you. we were on a date at the time. he did ask my father for permission, my mother let him in and he had to wait for my father to come home from work to ask him. he (her father) worked at republic steel at the time. My father said sure if she loves you.

when did you know you were in love?

june: I don’t thing you know you're in love until you live with somebody long enough. we have been together a very long time. in those days you just felt it, you weren't marring them for their money, in those days i just liked him, we were friends. See, i knew him when i was younger because his parents owned a store. i used to call him four eyes. we used to go to the old rock pile stadium. they used to have fourth of july parties there, and we would play baseball there with the boys and handball too. there were six courts always busy with people. my brother played handball with him, and they used to make fun of me because i was so thin. he would say don’t turn sideways or i can’t see you, so i would call him four eyes. this was in 1948 and we weren't really friends until that dance. he said you really changed. you knew everyone in your neighborhood, we became friends before we really knew each other. we liked each other. he could not dance well at all, so i would dance with his friends and i would only slow dance with nelson. you always (left) with who you went to the party with, that’s what we were taught. we always had a good time, simple and easy dating, no drama. i have always believed you have to like someone before you become friends. love comes. my mother said you grow to love each other, but you had to be friends first. but we worked together (in our relationship), we never cursed or threw things at each other. we talked it out. if you take care of the little thing the big things won’t get in the way. never go to bed mad, talk it out, it’s your whole lifetime. don't forget in our wedding vows, honor and obey were in there for the women. and i turned to him and mouthed, “no way in hell” and he knew. i was crying after the wedding and people asked if i felt like i made the wrong choice. i said (no) it was emotional to me, i was giving my life to someone and it was a big deal and i believed in those things. i didn't get my wedding gown out until the day before my wedding and i had bought a sample (dress) because that was all i could afford. i’ve still got the gown. my oldest daughter wore it to her wedding. our whole lives have been laughter, we didn’t need material things, just each other.

how long have you been together?

june: we only dated for oh from the fall of 1950 till june of 1951. when he came home in 1952 i had a friend who also had a fiancé in the service and she could not find a (wedding) hall and nelson  and i drove her around to find a hall. we had found one that she liked and right there on the spot nelson asked when is your next opening? now remember this is june of 1953. and the man said i have one more and that’s august 29, 1953. when he came back from the war i put the ring back on. i told him that if he could promise me that he would be in the barrack during the war i would leave the ring on. but he couldn't so i dated. but it worked out and when he came home i knew he was the one.

nelson: we have been married 64 years in august of this year.

when you picked out the ring did anyone go with you?

nelson: my mother went with me, i didn't know what to do so i brought my mother. i wanted to surprise her.

june: but the ring was the wrong size so we had to get it resized right after.

why did you pick that ring for your spouse?

nelson: i liked the ring and i could pay cash for it. it was what i could afford. i was working construction at $0.50 an hour.

how would you describe your relationship together?

june: perfect (she laughed). it was meant to be i guess, we love each other a lot. i would never let anyone hurt him and he's the same way. we proved it while raising our kids. when he came home from the service, we were at a bar and a girl was proposing to him (nelson), and i spun around in the chair and cocked my fist, he stopped me because he saw what was coming. we always talked. i would get quiet and he would ask what’s wrong? and we would talk. don't worry about the little things and the big things won’t get in the way. you have to talk. my mother said that.

what is your favorite story about your spouse?

june: my favorite story is, and this is no joke, when i gave birth the first time. he was so upset and he didn't know what to do. in those days the husband did not go into the delivery room with the wife, and he was going nuts. we had to stop and get my mother because we had a house of Canadian company and i was in pain while everyone was trying to say good-bye. and he was a wreck, he was worried i was going to have the baby in the car. he was a wreck and forgot the suitcase. He's the love of my life.

nelson: we were just on our way back from our honeymoon and we stopped to see my mother. the guest room had two twin beds. we were both in the same bed and she (his mother) comes in and turns to june and said, wouldn't you be more comfortable in the other bed? i said mom go to bed.